The 12th of April 1961 and astronaut Yuri Gagarin steps inside Vostok 1 to achieve what no human before him had done. Undertaking the first manned spaceflight in history, he captured the world’s attention and imagination in a heartbeat.
50 years on – as Russia and the rest of the planet, commemorate and celebrate that most incredible of human endeavours – Bobina prepares to release his own salute to Gagarin’s extraordinary voyage…
In 2004, with his first album ‘Catchy’ and then ‘Again’ in 2008, Bobina – the Russian Federation’s biggest DJ export - brought his electronic music vision to dancefloors. Now with his third studio album complete and primed to launch, Dmitry Almazov’s is about to soundtrack his own long-standing fascination with the night sky.
‘Rocket Ride’s star-gazing audio is ready to take flight.
The album blasts off with ‘Here Comes The Night’ – the album’s dynamic, dramatic piano-lined, orchestral-hit overture. Setting the tone for the audio that follows, ‘Visible Touch’ ups the atmospherics, using symphonic strings and rolling drums, before surfing into its epic, celestially tinged 3-minute breakdown.
To any self-respecting trance fan, ‘You Belong To Me’, which follows, should need little in the way of introduction. Featuring the smoldering, entrancing tones of American voxstress Betsie Larkin, in the short space of time since release it has become one of the biggest Bobina club hits to date. Last year’s runaway radio hit ‘Angel of the North’ (which scored an incredible 30,000 plays on stations inside the Federation alone) is up next. Featuring Sabrina Altan’s uplifting vocals it rocked floors from one end of 2010 to the other and appears in its new album mix form.
‘Rocket Ride’ continues to chart its upward trajectory with the progressive soundscape of the title track. Tubular, somber and techy in its first half, it rises up post-break and is propelled toward an intense climax.
Breaking into the upper atmosphere, ‘Rocket Ride’ fires its second stage boosters, delivering a rapid succession of afterburning trance. ‘Pune’ – a knowing nod to India’s fastest growing dance metropolis – brings hot tropic heat shimmer to its trance-progressive theme. Adding in eastern-flecked sounds and FX, it pushes the mercury higher still. With its looped, repeated vocal hook, ‘Let You In’ is another fully paid-up floor hypnotizer, while ‘Lamento Sentimental’ fills the role of the album’s big emotive/melodic number. Collectively it uses plucked guitar strings and echoing, ethereal pad & chord poignancy to deliver an uplift factor in the high 100s.
Putting the album into the stratosphere is the knowingly Depeche Mode-ish tones of ‘Caught In The Rain’ (which features pitch-perfect vocals from Alan Connor) and the rapacious ‘Scream Dream’. The only production collaboration on ‘Rocket Ride’, assisted by fellow countryman Ilya Soloviev, it delivers the album’s zenith with its huge drums and masterful, cyclonic synths.
‘Rocket Ride’ is another long-playing snapshot that captures the type of audio that Dmitry ‘Bobina’ Almazov produces and plays. A 10 track filler-free album, its every bit a forward look at the music he has primed for the summer and beyond.
It’s out through NewState Music in July. 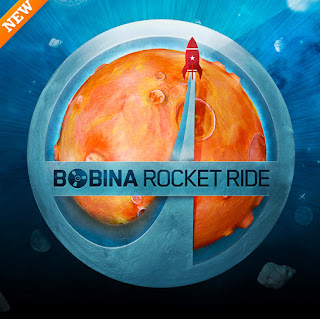